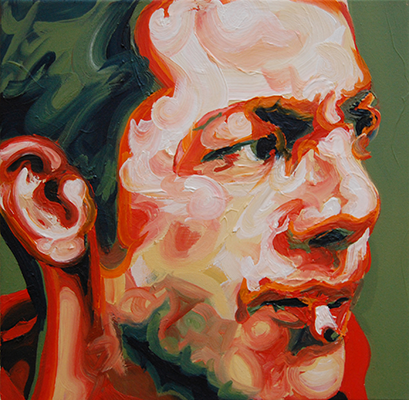 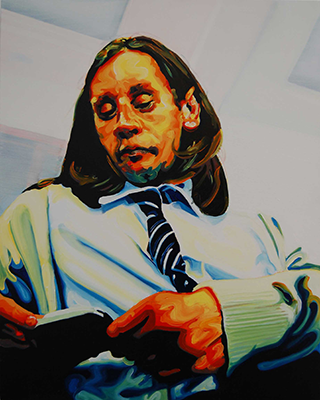 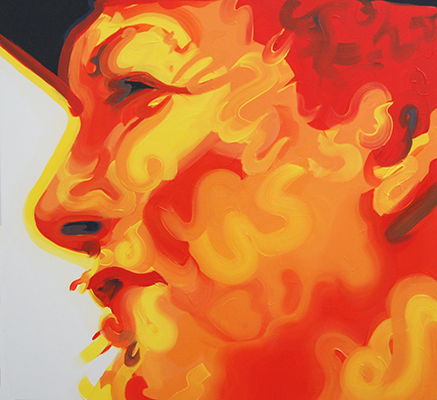 Emma Condliffe’s Paintings capture the rebel in us all.  In her portrait of a boy texting under the classroom table, Condliffe captures in paint a disaffected youth culture. This humorous portrait, with its thickly painted surface shows a seriously confident handling of paint.

My paintings explore the relationship between the photographic and the painted image. These portraits do not aim to mimic the photograph, but instead have a raw-ness and an honesty about them, wanting each brush stroke to be as evident as the compete picture, contrasting with realist painters, whose painting aims to represent the photograph as precisely as possible.

I use photography as the starting point to capture the image. The images that interest me are the ones that capture a moment in time or a fleeting expression, the very soul of humanity; something that would be lost with the subject in front of you. In translating the image from photograph to painting, the image is examined and deconstructed into abstract brush strokes and layers of colour, yet maintaining a representational quality and not losing the original narrative.

Emma Condliffe studied Fine Art at the Exeter School of Art & Design from 1995 to 1998 specialising in painting.  Schooled by John Virtue, she was influenced by his monochrome palette and strong brush marks.  At this time she was interested in the portraits of Francis Bacon and his depiction of the figure, but also interested in the manipulation of paint used by Gerhardt Richter.

Interested by the very nature of paint, its pliability and the contradiction between the representational image and the abstract nature of its form, she creates work which is figurative, but within which the paint remains a vital and evident element. Condliffe’s work seeks to question how this representation can then evoke an emotional response from the viewer.